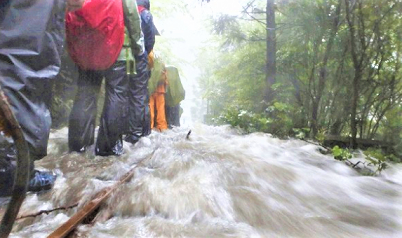 More than 260 hikers are stranded on a moutain in
southern Japan after record rainfall.

Officials in Yakushima Town, Kagoshima Prefecture,
say at least 262 people who were descending the
mountain on Saturday because stranded after landslides
and fallen blocked roads.

The Meteorological Aagency says that the rain in area
is falling at a tate seen only once every 50 years.

More than 50 millimeters of rain per hour has been
recorded, bringing the total amount in some areas during
12 hours to 8 p.m. on Saturday to more than 420 millimeters.

The GSDF plans to use helicopters to evasuate them
and to search for any others still trapped on the
mountain when weather improves.

Town officials say there are no reports of injuries.

Yakushima Island is popular with hikers who visit
to see the huge cedar trees, some of which are
order than 1,000 years.